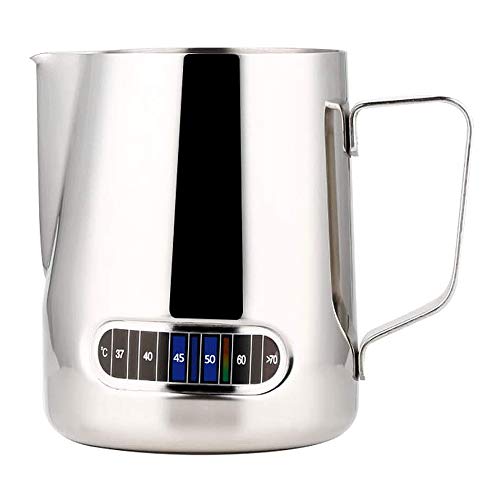 If you’ve chosen a machine that includes a frothing arm for foaming milk for drinks like cappuccinos, you’ll need a jug that’s shaped well for the job. Imaginatively termed ‘milk frothing jugs’, these milk pitchers allow the machine to aggressively texture the milk without it flying everywhere, thanks to their tapered shape.

Before we go any further, we should note that if you’ve got a machine like the Delonghi Eletta or the Melitta Caffeo Barista TS you don’t need one of these as it’s done for you by the integrated milk texturing systems.

Are All Milk Pitchers Created Equal?

As with virtually all products, you can get different features depending on what you’re buying. There’s a couple of key considerations with milk jugs for coffee machines, so lets look at them individually.

The capacity of a jug reflects how much it will hold when you’re preparing milk for your coffee. Also referred to as volume, it’s usually measured in millilitres (ml), and will typically fall into the range of 350ml at the smaller end, ranging up to around a litre for the largest jugs. For those of us that still work in old money (imperial measures rather than metric), a pint roughly equates to the 600ml jugs, as a pint is 568 millilitres.

Of course, very few people will be frothing anything like a litre of milk in one go, unless they’re running a commercial operation. What you have to remember is that the milk takes up more space once frothed, and of course blasting air through it is the way that’s achieved. Both of those together mean that the jug will need to be significantly larger than the amount of milk that’s initially poured into the jug.

As a rule of thumb, 600ml jugs should be sufficient for most home consumers, so if you’re not sure what you need, the chances are that a 900ml+ capacity pitcher would be overkill.

The second main factor to consider is whether you get a jug that includes the ability to read the temperature of the milk in the jug. A sometimes forgotten effect of frothing is that it heats the milk as part of the process as well as creating the bubbles for the foam.

There are two common formats for temperature readings, one is a panel that somewhat resembles the film thermometers you hold against a child’s head to check for a fever, with the other being a more traditional style metal thermometer with a long metal probe to stretch down into the milk, and usually includes a clip to attach it to the side of the jug.

Of course, the jugs are also available without a thermometer at all, in which case you can buy the latter of the above types separately later if needed.

Let’s have a look at some of the more popular milk jugs on Amazon right now, grouped by their size. Below we’ve got a selection organised into 350ml, 600ml and 900ml capacities.

If you will rarely need to froth milk, or are very limited on space, a small jug like these are likely to be a good choice.

Here’s the same size, but this time specifically with thermometers:

As we said earlier, 600ml jugs are what we consider to be the standard size, so are a good choice for people who are unsure about the size they need. They’re big enough for regular use, especially if you’re making coffee for more than one person, and also reduce the risk of spraying milk foam out during frothing compared to the smaller options.

Finally, if you know you want a big jug, for completeness here’s some 900ml choices:

And the 900ml varieties with thermometers included:

If you enjoy a cappuccino, to make it at home you’ll need to froth milk. To achieve that you’ll either need a machine with that functionality built in, or one with a manual frothing arm (like the one with the Magnifica from Delonghi) that allows you to use one of these milk pitchers.

For most people, a 600ml capacity jug will be perfect, but if space is tight you might prefer a smaller option. 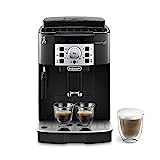