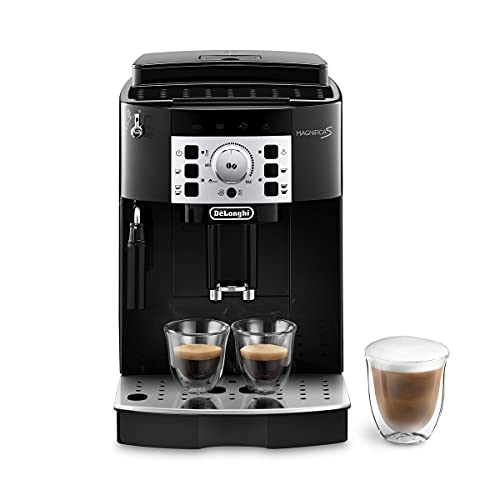 Let’s get started by pointing out that this Delonghi Magnifica machine is an updated version of the ESAM4200 that spent years on top of our homepage table of the best value bean to cup machines.

If you’ve read that review, all you really need to know is that this is a newer model, and it’s been refined slightly. The shape of the machine and layout of controls make it look very different, but in terms of functionality you get a slightly better froth from the manual arm and the cleaning function seems to be a little faster and more effective. These are all very hard things to measure, so we’re relying on the lower number of reported problems to say that with any degree of confidence!

As we said in the review of the older ESAM4200, we do believe the Eletta range of machines are a much better choice if you can afford them, not least because they automate the creation of lattes, cappuccinos and other milk based drinks with the included milk texturing system that’s separate to the main coffee machine. They’re also discounted fairly frequently on Amazon too, so if you like a latte or cappuccino, do take a look at the Eletta review too.

So, back to matters at hand, with the Delonghi Magnifica S, model number ECAM22.110.B.

The Magnifica range tend to offer great value as starter machines, and are also brilliant if you’re on a tight budget. Like its predecessor we talked about above, this is a more than capable step into the world of enjoying freshly ground and brewed coffee at home.

In terms of automation, this machine simply makes black coffee. It does have a frothing wand (the arm on the left hand side of the machine) which will gently heat and froth milk, but thats a far more manual process than you’ll get with more expensive machines like the Eletta and Barista TS from Melitta.

Like the ESAM4200, this ECAM 22.110.B machine has received thousands of positive reviews on Amazon, earning its place at the top of the best seller list at the time of writing (May 2020). 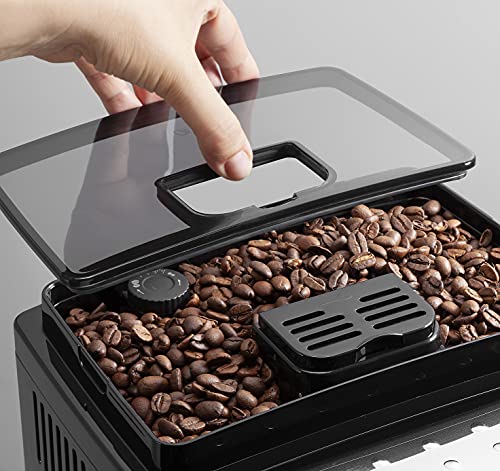 Key Features Of The Magnifica ECAM22.110.B

As you’d expect from a popular home and kitchen appliance brand like Delonghi, this Magnifica S machine is very simple to use. It’s going to be fast and easy to get set up out of the box, and while you’ll inevitably have to spend a little time getting used to its functions, it’s a far easier model to learn than many other machines, especially those that are designed to appeal to those that are more geeky about their coffee (you know who you are!).

We’ve consistently seen that most of our readers are looking to get great coffee at home without having to learn a lot, and that explains why Delonghi’s machines sell so well. The Magnifica range are perfect for most people, they are customisable in terms of strength of coffee and length (size) of drink, but they’re easy to get the hang of and you’re unlikely to go far wrong, or find yourself wondering how to reverse a change you’ve made.

From here on in, the detail of this machine is very similar to the older ESAM4200 model, so if you’ve read that already you may wish to skip the rest and check out the price on Amazon:

For everyone else, let’s take a deeper dive into the features that make this machine so good for beginners and those on a tight budget.

Designed For Beans, Works With Ground

It’s hard to imagine that anyone would want to buy a machine like this and regularly use ground coffee. It’s called a bean to cup coffee machine for a reason. With that said, you might ran out of beans from time to time, or have a bag of ground coffee kicking around in the back of a cupboard to use up.

This machine will make coffee with both, so if there’s a global shortage of coffee beans at some point in the future, you’ll be able to make use of ground coffee too if you can get your hands on it.

It does seem a little redundant on the face of it, but every so often we hear of people that love that feature as they have a member of the household that likes to drink decaffeinated coffee.

It’s a fairly standard feature of De’Longhi machines (with the exception of some slimline Autentica models) that the machines include a generous 1.8 litre water tank. If you drink a lot of coffee you’ll really appreciate that, as it quickly becomes frustrating if you’ve got a machine  with a small tank that needs to be refilled really frequently.

When you get a new machine you’ll probably find yourself playing with all the functions, but we’d be willing to bet that within a couple of weeks you’ll be using the one touch functions and rarely pressing anything else!

If you’re a fan of milky coffee like latte or love a cappuccino, then you’re probably more likely to be drawn to Delonghi’s Eletta range. That doesn’t mean that you can’t make those drinks with this Magnifica though, it’s just a manual process instead of done automatically for you.

It works with the manual frothing arm that’s on the left hand side of the machine in the image, and works by blowing hot jets through the milk, just as you’ll see them do in Starbucks (other coffee shops are available!).

This is one area that Delonghi are said to have improved the machine since the older ESAM4200, but it’s not the sort of thing that you can really tell for sure. We’ll just believe it, as it works well. Just be ready to spend a while warming milk for a latte – it’s going to be a lot quicker in the microwave.

Delonghi provide an impressive two year warranty on their bean to cup machines in the UK, a really strong sign that they’re happy to stand behind their quality. Compared to other manufacturers, some of whom offer nothing more than the standard one year guarantee, that’s got to be a good sign when you’re spending a sizeable sum on a coffee maker.

While we’ve only just got to reviewing this machine, it has been around for long enough now to gather some great feedback online from customers. We like to collate common points made, as we think that’s a great way for you to get a feel for how the machine performs in real kitchens for real people.

This machine has now been available for several years, and many customers have noted that it lasts really well.

It’s advisable to look after it with regular cleaning cycles (there’s a light that comes on when it’s descaling time – Delonghi have their own brand of descaler liquid that you can find here.

Following the cleaning instructions carefully (which fortunately are straightforward) will help ensure that you’re enjoying the coffee from your new machine for many years to come.

We’ve covered this above, but there’s been a few buyers that have been confused by the way this machine is described as a cappuccino specialist. If you want an automatic milk system, you’ll need an Eletta rather than a Magnifica. You can see how the various Delonghi ranges compare in our article on Magnifica, Eletta, Autentica, Dinamica and Prima Donna machines.

You can of course make a cappuccino with this machine, you just need to use the manual frothing arm for the milk texturing.

The Beans Are As Important As The Machine

It’s certainly true that Delonghi make great coffee machines, but you’ll need to find your favourite beans too. For example, if you love Starbucks, you can buy their beans as we’ve written about here. We’ve also talked more generally about beans and brands here.

The Grinder Is Configurable

This is a setting most people probably never use, but you can adjust how coarse or fine you like your beans to be ground. The grinder itself is described as silent, which is a very generous claim. Granted, it’s a lot quieter than some models, but don’t expect it to literally be silent.

It was a sad day for us here at BeanToCupCoffeeMachines.net when we realised the time had finally come to stop recommending the predecessor to this machine as our top choice, but at least this Magnifica S has continued and built on the ESAM4200’s success.

Price wise, you’ll struggle to do better without spending a lot more, so if you’re on a tight budget, this is almost certainly going to tick more boxes than any other machine you’ll find on the site in your price range.

As we’ve said many times before, get the slightly more expensive Eletta if you can afford to do so, otherwise this Magnifica gets our enthusiastic backing as a solid second, and more importantly cheaper choice.