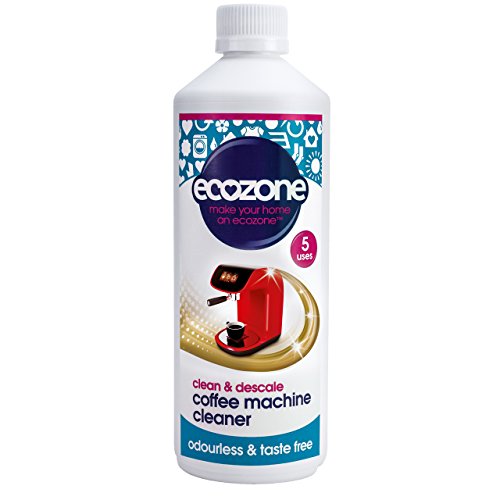 Part of owning a coffee machine is learning to descale it properly.

Once you’ve owned one for a while, you’ll probably wonder whether or not you need to use the ‘official’ branded descaler solution, or indeed whether you need to descale your machine at all.

We’ve previously looked at the branded descaler liquids for coffee machines, and given examples of how to descale a coffee machine.

Of course, the advice from manufacturers will always be to use their liquids, as they want to increase their profits with consumables like descaler and filters.

Let’s examine the reasons why you might want to (or not want to!) use a cheaper, third party descaling agent for your machine, and then move on to some of the options you’ve got if you decide to take the risk.

Is It Important To Use Branded Descaler?

The first point to make is probably obvious, but worth mentioning anyway. When you initially buy you machine, you’re going to get a manufacturer’s warranty. In the UK, that’s almost always a minimum of twelve months, but sometimes more.

For example, if you buy a coffee machine from John Lewis, you’ll likely get a two year warranty included as that’s one of their ways to get you to buy from them. Similarly, you can buy extended warranties (including from Amazon and their partners) to cover not only machine failure but also things like accidental damage too. When you’re spending hundreds on an electrical appliance, it’s certainly worth considering whether it’s right for you.

If you choose to use descaler outside of the selection recommended by the manufacturer of your machine, you run the risk of them challenging whether the guarantee is still valid. These days companies tend to tread a little more carefully than they used to with making wild accusations like that thanks to increased regulation, but is it worth the risk?

We’re not saying it’s right or wrong to choose cheaper descaler, just that you should probably stop and think about it.

Have a quick look at the prices of ‘official’ products here:

As the prices change regularly, we’ve linked to Amazon as a price check as they tend to be very competitive with pricing. You’ll notice that these descalers aren’t hugely expensive, but they are something you’ll be using every month or two, so buying bigger packs can offer significant savings.

Once you’re out of warranty, you might feel that you’re happy to take the risk with other brands of descaler. It’s not something we recommend, as relative to the cost of the machine, we feel it’s a fairly small cost to keep your appliance in great working order.

With that said, here’s some options for non branded descaler.

Our first pick is Ecozone coffee machine cleaner and descaler which stood out due to its popularity with customers, selling in large numbers (reflected at the time of writing as the highest places non branded descaler on Amazon).

It comes in a 500ml bottle, and requires 100ml per descale cycle, diluted as indicated on the bottle. That means you’ll get 5 cycles, which is likely to last between three and six months depending on how often you use your machine. 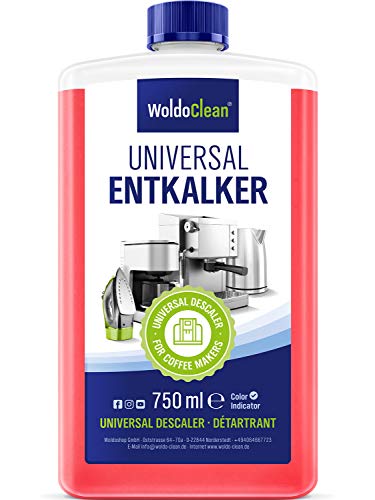 There are two varieties of WoldoClean descaler, again selling well. The first is the bottle version, and the second are tablets. Both are marketed as suitable for descaling coffee machines with the liquid being given the OK for kettles too.

Firstly considering the liquid, it has a rather unusual claim in that it changes colour with use. That means that you can tell when it’s no longer usable. In other words, the same solution can be used repeatedly according to the manufacturer, until the point that it’s changed to yellow from it’s original red colour.

You get 750ml in a bottle, with each use requiring 125ml of descaler liquid to be mixed with water, so 6 uses per bottle.

You can check the price and buy on Amazon here:

As mentioned a moment ago, it’s not just liquid the is available from WoldoClean, they also do a tablet version too. If you prefer to use tabs instead of descaling solution, this might be worth considering.

Can I Use Vinegar As Coffee Machine Descaler?

This question seems to pop up a lot, probably as a result of a lot of people using it historically to clean lime-scale and other build ups from kettles.

As with the third party solutions and tablets above, manufacturers generally won’t commit to anything other than their own products to clean their machines.

For that reason, we can’t endorse vinegar as a cleaning and descaling solution either, but what we can say is having tried it with white vinegar, it did leave a strange flavour for the first few coffees we made after the descaling cycle was complete. For that reason, our opinion is to avoid vinegar for that reason, and it may even damage your machine in time too.

Does Using Bottled Water In The Machine Remove The Need For Descaling?

You may get away with descaling slightly less frequently, but there’s a reason some people call it mineral water – it’s not pure water from a bottle either.

Save yourself a fallacy – you’ll spend a lot more money on bottled water than you would have done on descaler when using tap water!

Can You Reuse Descaler Water?

Another related question we’ve seen is whether or not you can use descaler more than once.

It’s probably not the best idea – it works by creating a subtle chemical reaction to dissolve things like limescale from clogging up the inside of your machine, so what you get out isn’t quite the same as what you put in. It’s probably true to say that putting it straight into the kettle after the coffee machine cycle completes might help clean the kettle, but probably not to the same extent as using fresh solution or tablets.

The one thing we’ve seen (and we mentioned above) that may be an exception is the WoldoClean liquid that changes colour from red to yellow to tell you when its ‘power’ has been depleted to the point of no longer being useful. Here’s the link again if you want to check it out:

Is Coffee Machine Descaler The Same As Other Descalers?

When you buy bean to cup machine cleaner liquids, they tend to be packaged specifically for automatic coffee makers. They’re almost certainly all very similar, and also very similar to other solutions like those sold for kettles. After all, the water going into a kettle and coffee machine both come from the same tap, so any impurities cause build-ups inside of machines are going to be very similar.

Where there’s a difference is in the machines. It doesn’t necessarily follow that the pipes and tubes inside your coffee machine are exactly the same as the innards of your kettle. There’s likely to be a lot more things like seals where parts connect than in a kettle, so it’s possible that these could be damaged if you use the wrong cleaning agents.

While manufacturers point to these risks and recommend their own products, a lot of people buy the third party solutions and tablets ahead of the brand’s own versions. Take from that what you will, as we’ve not seen a huge number of complaints in reviews for these cheaper products claiming they damaged coffee machines. Naturally though, the official line is always to use the recommended cleaning products.