The machine is now often out of stock in many retailers, so for a newer option, try the Delonghi ECAM44.660.B Eletta.

DeLonghi’s Magnifica ECAM22.320.SB used to be their greatest model in our opinion, until we later got our hands on the ECAM44.660.b Eletta. It was leading the market as an all rounder coffee machine, especially in terms of quality for the price you pay.

UPDATE: The Magnifica range’s cheaper ESAM4200 placed high on our top ten, so it’s important to note that the difference there is outstanding value, not that it’s a better machine. To be absolutely clear, if you want total simplicity out of the box for the lowest price, go with the DeLonghi ESAM4200. For more control and configuration options, this is a great choice when available (it’s often out of stock these days).

So, now that’s cleared up, on to our detailed thoughts and those of previous customers on this DeLonghi coffee machine. 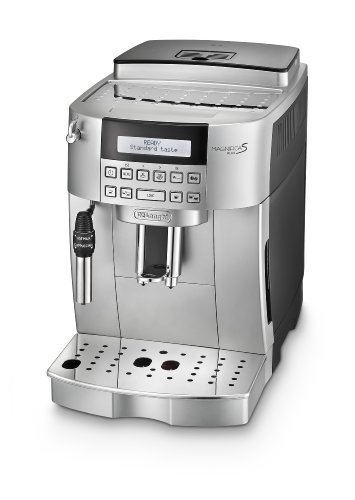 The real strength of this machine is simplicity. Looking at the image, it’s clear to see that the controls are simply laid out, and they are your interface to the comprehensive features of this leader in the DeLonghi Magnifica range.

As an all rounder, you’ll be able to make the types of drinks favoured by the hardcore coffee lovers in your circle of friends, such as a strong espresso hit, while at the same time appealing to those who are more close to the fringe of the café culture, with lattes and espressos.

While you probably intend to make your coffee with fresh beans if you’re investing money into a bean to cup coffee maker, there will probably be times when the convenience of ground coffee may be preferable.

This machine handles both, and while (as you would expect) the freshly ground beans will give much better results, the ground coffee will also beat instant coffee hands down!

While DeLonghi describe the grinder as silent, that’s not quite true, at least to my definition. In my book, silent means you can’t hear it, and unless I’m very confused, there’s definitely sound as the beans are ground.

Perhaps they mean the grinder itself is silent and the noise is the beans breaking down. Either way, it’s a lot quieter than most, so if you’re likely to be making coffee while others sleep, this is a great feature as some machines we’ve seen (or should that be heard?) could probably wake the dead.

The grinder is built into the coffee maker, which may sound obvious, but if you’ve read a few reviews on the site, you may have stumbled across one or two that have a separate bean grinder to the machine itself.

The DeLonghi has a really efficient mechanism which boasts thirteen configurations which will help you to adjust how smooth the resulting drink is.

The machine can create two cupfuls at a time, meaning that you can effectively brew a mug of coffee if you’re like me and want a good sized hot ‘long’ drink to sit down with.

It’s a common gripe with many coffee makers, especially the bean to cup machines, that they produce too small drinks. Perhaps it’s a British thing that we like a more long lasting coffee hit, so being able to double up is a great bonus over some other machines. 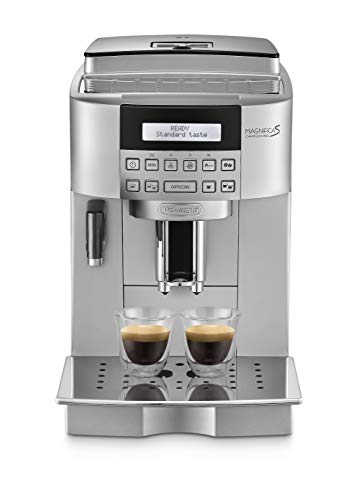 ECAM22.360.S Available For Milk Based Coffees

Alongside the ECAM22.320.SB, you’ll find a very similar machine – the ECAM 22.360.S which swaps the frothing arm for what’s described as a fully functional cappuccino system.

In fact, it also allows you to make lattes too – with selectable ‘frothiness’ via a dial on the milk carafe. You can check the current Amazon price for the ECAM22.360.S here:

As always, we turn to the thoughts of previous customers so you can get a feel for how the ECAM22.320.SB performs in normal day-to-day life, rather than taking our word for it.

We’d highly encourage you to check out the latest customer reviews on Amazon too – you can find them by clicking the price check button at the bottom of the page and looking for the customer ratings and reviews section. For now though, here’s some things other owners have to say…

The Long Coffees Make This Machine

Where some machines limit you to a small cup each time, this one specifically includes a long coffee option. This seems to be particularly popular with the americano fans among the reviews, but it’s a consistent plus point.

Keep A Cup On The Machine

An interesting point this, as it holds true with a number of machines. Keeping a cup under the nozzles of coffee machines can help to reduce drip trays filling up too quickly. It’s easier to empty a cup out that clean a drip tray in most cases, so we thought it was worth a mention!

It’s probably something you know already, but this machine is more likely to be used with chunkier, heavier latte style mugs.

By heating them up before the machine serves your drink, they will cause less cooling of your drink quickly, meaning you’ve got longer to savour your fresh hot coffee.

To achieve this, you can simply fill them with hot water for a few seconds before you start the programme up (emptying the water out again first of course!).

Easy To Use And Plenty To Choose From

One of the biggest and most important compliments that the DeLonghi ECAM22.320.SB gets is about its ease of use.

When you compare it to the expensive machines (where people often complain that they don’t have a clue what they’re doing), this DeLonghi unit offers the best of both worlds, at least for beginners.

You’ve got plenty of pre-programmes to choose from to give a different variation of coffee, giving you a choice without demanding the experience and knowledge of a professional barista.

Milk Heating Can Be Slow

The one gripe we found was that frothing the milk and heating it can take a while, but these were isolated reports.

Perhaps this may be the inexperienced users expecting the process to happen as fast as a kettle, as other users seem to be perfectly happy, but if you’re thinking of buying this coffee maker only for lattes, you might want to look elsewhere if you’re on the impatient side!

As you’ve got this far, it’s going to come as no surprise to find out that the DeLonghi ECAM22.320.SB gets our seal of approval, particularly for people that are new to bean to cup coffee machines and want to make a wide range of hot drinks.

If your coffee drinking extends to fairly regular visits to Starbucks, Costa Coffee or one of the other local cafés in town, but you’re not yet in a place to know all about infusion, pressure gauges and all the other gizmos on the higher end machines, give this machine some serious thought.

It’s often available online for a lot less than in the high street and retail park stores, and you can see the current price by clicking the blue button below: