This Jura Impressa F8 review is the first we’ve added to the site from the Swiss manufacturer. The first thing you notice is its classy appearance, in the ‘Piano Black’ colour scheme that’s going to make it look the part in any kitchen. As you read the review, it will become clear why the Impressa F8 has quickly taken the number three spot in our top ten models.

So, let’s get to the detail, and find out more about what makes Jura’s F8 bean to cup coffee machine a great one for your shortlist. 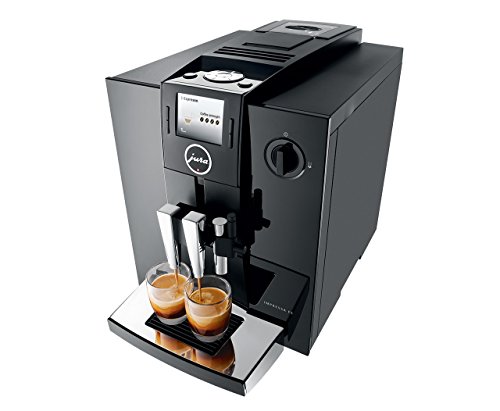 We’re going to start with a rundown of the features of the Impressa F8, so that you know what you’re getting if you choose to buy. A lot of machines offer the same core functions, so we tend to focus on what stands out, so rest assured, if we rate a machine highly (as we do with this one), it’s going to be a good all rounder unless we specifically say otherwise.

Some of the more popular mass market coffee machines are starting to look a little bit dated (not least the hugely popular and bestselling ESAM4200 by Delonghi), but that couldn’t be further from the truth with the Jura Impressa F8.

It’s a very stylish and sophisticated looking machine, that wouldn’t look out of place in an upmarket cafe or bar. Jura have managed to pack a lot of controls in to the unit to give near unparalleled control over coffee making, yet retain a fairly minimalist look.

There’s something about a black and silver finish that just looks the part, particularly on kitchen appliances that sit on the worktop – you don’t want something ugly to look at as a permanent fixture in the kitchen!

Whatever you’re into, the Impressa F8 has a coffee for you. While it’s great for the common choices like espresso and americano, it’s just as capable of serving up a macchiato too, or pretty much anything else you can think of.

Of course, the more skilled you are as a barista, the more experimental you’ll be able to be, but if you just want something easy, stick with the 13 preset programmes and enjoy what Jura’s experts have created for you in advance.

Jura’s range of coffee machines are almost always great to look at, and they manage to do that without compromising the ease of use. It’s not as common as you might think either, if you look around our reviews section, you might be surprised if you look closely at just how complicated some machines look.

The Impressa’s control panel is based around a central colour display that’s used to guide you though the process, which helps to turn a maze of functions into an intuitive set of menus (or a carousel as Jura call it).

The control of the menus is achieved by a ‘rotary switch’ located on top of the machine at the front, neatly sandwiched between the power and program buttons. The buttons either side of the screen vary in purpose, depending what’s on the screen at the time. in general though, the screen splits into four zones, with each button used to select the corresponding zone.

Finally, there’s a twisting dial on the right hand side of the front of the machine which is used to flick between hot water and steaming modes. All in all, it’s very easy to get the hang of, but you might need to use the instruction book as a cheat sheet (there’s a short version available too if you’re impatient!).

It might seem like a trivial point, but not all machines have thought about this. The Jura’s power cable emerges at the bottom of the rear of the machine, making it very easy to plug it in and neatly arrange any excess cable out of sight.

There’s also a ‘master’ power switch in the same location – worth noting as we discovered, having thought the machine was dead on arrival after pressing the power button on top and nothing happening!

If you’re a froth fan, you won’t be disappointed – Jura machines tend to be very good frothers (if that’s a word) and manage to top off drinks to the same standard as you’ll usually find in the high street coffee shops.

It’s certainly an impressive result, even if we found it was a novelty the wore off rather quickly. We’re not the biggest advocates of milk foaming though, so you might be more excited that we are!

While it might seem odd to mention, some people do like to use pre ground coffee with a bean to cup machine, at least occasionally. A common reason is to get a cup of decaffeinated coffee from time to time, without needing to empty out the beans from the hopper, make a drink then switch it all back again.

Similarly, if you have a brand of pre-ground coffee that you like as a change from your normal freshly ground beans every so often, the Impressa F8 has you covered.

Some machines can be quite slow to work their way through programmes, but Jura have put a lot of thought into minimising these delays. The water heating tends to be the cause of the waits, so the F8’s solution is to heat it as it passes through the internal pipes of the machine.

The technical detail is a bit beyond us, but it seems to work well. If you want to know more and like the geeky detail, give ‘Jura Thermoblock’ a Google!

Just by the water canister (which holds just under two litres), there’s a replaceable water filter that cleans the water as the machine begins each cycle.

Depending where you live, this may carry a different weight of importance, but if you’re in an area where water has a strong taste, this may well be a big plus towards buying the Jura Impressa F8 over other machines. Water is such a big part of making coffee, it will go a long way towards giving consistent results day after day!

Now we’ve looked at what the machine can do, let’s turn our attention to what really matters, what real life customers think. We’ve had a good look around at reviews on the web, and collated the common themes. Hopefully this will give you a real feel for what is good and not so good about this machine, with some battle testing thrown into our Jura Impressa F8 review!

Beats A Nespresso Hands Down

Given the price difference, this isn’t a great surprise, but it seems a lot of people have gone straight from a Nespresso machine to a Jura, which is, to be fair, a huge leap. The resulting view, again unsurprisingly, is that the quality is significantly higher – fresh coffee really being fresh is the most commonly highlighted plus point.

This is probably one of the more important points to note – just how easy it is to get started. Bean to cup coffee machines tend to fall into two categories, they are either easy to use but inflexible, or take time to master and give a lot of opportunity to experiment. This Jura machine gives a lot of scope to both, which is great if you’re short on practice time or not sure if you’ve got the skills needed just yet.

Temperature Lets It Down

We always like to find a negative or two, and this has to be the biggest one by far for the Jura. For us, the temperature is fine, but we do understand that some people like their coffee as near to boiling point as possible without burning the coffee.

It’s probably going to be a minority of coffee lovers that find this to be a deal breaker (hint: if that’s you, take a look at Heston’s Dual Boiler), for most of us, we find that it takes the roof of our mouth off!

The other point that we wanted to highlight isn’t necessarily a negative per se, but just the fact that it’s a lot to spend, and let’s face it – it is! There’s a lot of machines available in the sub £500 range, and we’d never advocate or encourage spending more than you can afford.

Having said that, you do get what you pay for, and in this case we believe it’s exceptional quality. If you really love coffee, it’s probably worth paying as much as you’re comfortable with to get a great machine, and that’s exactly what you’re getting here.

At risk of sounding like we’re repeating parrot fashion, this Jura Impressa F8 review has uncovered a bit of a gem of a coffee machine. Yes, it’s pricey, but yes, it’s good. If coffee is a big part of your life, and you can stretch to the price tag, it’s a very strong contender indeed.