While we don’t really cover much in the way of machines intended for commercial use, there are plenty of bean to cup coffee machines out there that are either designed for that purpose, or domestic machines that are commonly used in that way.

You Get What You Pay For….To A Point

As you will learn in this section, there are a lot of common misconceptions about the type of coffee you buy on the high street and the level of training that employees get for the big name stores. What’s important to understand, though, is that the type of machines that are used in commercial settings like cafes and restaurants are almost certainly going to run into multiple thousands of pounds, unlike the ones featured on this website that are likely to be priced from around two hundred pounds up to the real extravagant buys for home use which occasionally drift into four figures.

When Is Expensive Too Expensive?

The fact of the matter is that unless you’re really wealthy, you’re unlikely to need to spend thousands, as there’s a diminishing return once you get beyond the machines in the £700-£1000 range relative to the amount you spend. In other words, much as the multi thousand machines are impressive, we’d never spend that much on a home coffee machine!

With all that said, it’s worth mentioning a few of the well known commercial coffee manufacturers in case you do want to ignore our advice and spend more!

We’ve recently added some Jura machines to our domestic reviews, including their impressive Impressa F8 coffee maker, if you’ll excuse the pun! While we definitely consider that model to fall into the realm of the home market they do offer other models too that are more suited to a professional environment.

Probably best suited to venues offering self serve coffee options, Aequator offer a range of machines like the Venezuela which operate as fully automatic coffee dispensers, but without the poor quality that so many people associate with vending machines. In a premium location you want to be able to serve high quality refreshments, so naturally the opportunity so provide them without needing a fully qualified and experienced barista is a great solution.

One of the lesser known machines comes from Coffeetek, who are worth looking at for venues with a higher level of footfall. In a situation where you need a machine to produce a higher number of drinks, they offer solutions that will run for longer than most alternatives without the need for replenishing beans (and water if canisters rather than a plumbed in solution is needed).

More typical of the sort of machine you’re likely to see in Starbucks and Costa, Mastrena have enjoyed a lasting relationship with the American coffee giants. As you might expect, we’re talking large machines, aimed at locations like coffee shops and restaurants that revolve around a near continuous cycle of making coffee and other hot beverages. Another difference is that these will typically be operated by members of staff rather that being installed as a self service option, although they’re increasingly accommodating automated programs in order to relieve the staff from needing to complete complex barista training courses.

In summary, commercial coffee machines are available from a range of manufacturers, some who are also actively involved in the home coffee market. Typically, the commercial sector is split into self service and barista led groups of machines, which will fulfil very different roles for a business. While we’re much more focused on domestic machines, there is plenty of demand for these high demand machines for hotels, conference centres and food outlets across the country. 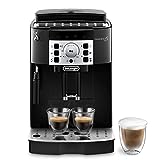